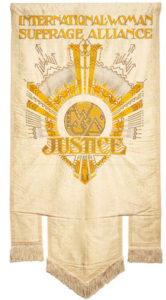 My husband is a bibliophile and in an antiquarian’s catalogue, he found the ‘Travel Letters from Africa and Asia’ by Aletta H. Jacobs. Dr Aletta Jacobs was the first female university student, the first female doctor in the Netherlands. She was president of the Netherlands Association for Women’s Suffrage from 1903-1919, when we did got the vote. She was present in Berlin in 1904 and she organized the IWSA Congress in Amsterdam in 1908 and the wartime meeting of women in 1915.

The letters are from her famous trip around the world with IWSA president Carrie Chapman Catt. I got this book (2d ed.1915) for my 80th birthday and I was delighted to see that there were also some letters from Sweden and Norway. Actually, the book opens with a description of the sixth congress of IWSA, the predecessor of IAW. That was quite an occasion.Directly at arrival in Stockholm, the delegates were greeted by an enormous flag in the colours of IWSA, white with golden yellow.

Monday morning, 11 June, at 10 o’clock sharp the President opened the sessions. In the morning there were all kinds of domestic matters, such as translations. One of the American delegates presented the International Alliance with a beautiful gavel. It was a gift of the women from the state of Washington to thank the Alliance for her support in regaining their political rights on the 8th of November 1910. ‘Regaining’ because the women from Washington had equal political rights with men when Washington was a territory. When it became a state in 1890 the women lost their political rights. It took them twenty years of arduous struggle to regain their rights!

When the roll call came to Finland it was apparent that among the Finnish delegates there were quite a few members of parliament. Former Congresses had seen delegates with political voting rights, even some female city councillors. This was the first time to have members of parliament amongst us. It was completely understandable that when their names were called with the addition ‘MP’ they were greeted with great enthusiasm.

In the afternoon the festive opening of the Congress took place in the big hall of the Royal Academy of Music. The government of Sweden had sent the minister of Foreign Affairs, Count Taub, to represent it. This Conservative minister had shown himself to be a great opponent of the recently rejected bill on women’s suffrage. It was a sign of the brilliance of the opening speech by Mrs Chapman Catt, and all he had heard and seen that afternoon, that at the end of the ceremony this minister went to the podium, pressed Mrs Catt’s hand and assured her that in this one afternoon he had  changed from opponent to ally.

The big event of this afternoon was the presentation to IWSA of a gold embroidered white banner. The IWSA now has its own banner that from now on will grace the podium at all Congresses. The banner was carried by six girl students in their student’s uniforms,  followed by a choir of thirty girls, who sang the Swedish women’s song of freedom.

So far my translation of Aletta’s letter on the Congress.

We know now first hand what the official colours were: white and golden yellow, and we have witnessed the presentation of the gavel and our banner.

From the rest of the letters, it is apparent that it was (and still is) very important to have the support of men, how crucial it is to get an education and equal pay for equal work.

OPENING OF THE  “HOME FOR WOMEN” in Cyprus