Education for All, Including the Marginalized 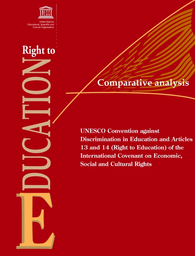 Political and legal context:
Chapter 1, Article 1.3  of the United Nations Charter identifies one of the organization’s purpose is to achieve international cooperation through ‘promoting and encouraging respect for human rights and for fundamental freedoms for all without distinction as to race, sex, language or religion (United Nations, 1945)’.  The 193 members of the United Nations, with further clarification on gender specific outcomes outlined in three global treaties, have committed to achieving gender equality.

-1979 Convention on the Elimination of All Forms of Discrimination against Women (CEDAW).  Described as an international bill of rights for women.

– adopted by UNESCO which aims to combat discrimination, cultural or religious assimilation or racial segregation in the field of education.

– Articles 13 and 14 of the International Convention on Economics, Social and Cultural Rights (ICESCR)

Persistent gaps in educational opportunities for women and girls in Canada exist at an acute level within the Black Community and the Indigenous Communities across the country.  While In 2009 the Ontario Ministry of Education “recognized the need for greater diversity within school boards through its Equity and Inclusive Education Policy, this policy in educational institutions continue to be predominantly under serviced with no change in hiring practices, no requirement for data collection and no designated resource allocation to address needs as they manifest in the intersectionality of gender, race, educational opportunities and poverty.

At all levels of education it is noted that, “There are many individuals and organizations that continue to resist any suggestion that racism exists in employment policies and practices in Ontario school boards and classrooms. This continued resistance ignores the mounting evidence of racial disparities in educational outcomes between African Canadian and other students” (VOICES OF ONTARIO BLACK EDUCATORS An Experiential Report – May 29, 2015).   The same challenge is further validated by student voices at the university level as reported in a Toronto Star article on February 3, 2016 by black students Sandy Hudson, Brie Berry, Yusra Khogali and Sefanit Habtemariam of the Black Liberation Collective.  “At our own institution, there are no courses where you can study black people at the graduate level. The school of Global Affairs is completely devoid of programs and courses that focus on the continent of Africa. This is the largest school in Canada (University of Toronto), often touted as the best. It’s difficult to imagine such an omission with regard to, say, Europe or Asia. Canada itself has a long and vibrant black history. Should we not be able to study it?” https://www.thestar.com/opinion/commentary/2016/03/01/canadian-campuses-have-a-racism-problem.html

Thirty years in public education as a professional has lead me to believe that education is rooted in building community within the school and extending that sense of belonging and purpose into society.  Our connectedness must be explicitly exposed because we each bring a gift that is valuable to others.  Educators are instrumental in influencing the learner’s confidence to expose their personal gift(s)  and realize their best life.  It should be a given that students have role models who look like them in the role of head of the class or a position of power in the institution.  This shared leadership among diverse groups builds strong, healthy communities and has a 360 degree affect on well-being, economic prosperity and realized potential for all.  The opportunity to fully participate must be accessible for all women and girls. Institutional biases based on ethnicity, culture and geographic location are devastating and must be addressed by government and Civil Society. In physics for every action there is an equal reaction as Issac Newton pointed out so clearly.  This tenet is the same in institutionalized education.

In indigenous communities for example, continuing to ignore the barriers that reinforces segregation practices in education is in and of itself a non commitment to equity and inclusion.  No matter how one argues that school segregation serves the needs of a particular group.  Leaving whole school communities without internet access or connection to partner organizations is a segregation practice.  At its core isolation destroy’s community.  Segregation forces students into tribal groups that may organize on norms that are myopic.  Women and girls in the far north experience this sense of isolation despite the existence of technology that is available to the rest of Canada.

Black women and girls struggle with not seeing people who look like them in their education institutions.  In the absence of representation, women and girls are subject to implicit or explicit biases in every aspect of their education.  Often Black students will say they feel like they are being judged (evaluated) with a different set of standards than their counterparts of different races.  They have to be prefect because they are representing their race or they are full out denied privileges offered to others.

“Even the animals choose their own breed” was an utterance from segregationists during the period when integration of schools were taking place in the southern part of the United States.  Are there any similarities to situations in 2019?  How is education for Indigenous children being organized in North America?  How is education for Black students in Canada being delivered?  A disproportion number of students of colour continue to be represented in Special Education.  Could it be that teaching strategies for black students need to be examined?

Indigenous schools in remote areas of Canada are still receiving donations of books from schools in urban areas.  The schools in urban areas, typically non Indigenous communities, are funded to support the learning needs of their students.  Urban schools are outfitted with resources necessary for 21st century learning because there is a budget to do so and pressure from parents, the Ministry of education and teachers’ unions.  Therefore, the effort to educate students in urban areas is focussed and intentional.

After the devastating effects of Residential Schools in Canada it is time for Canadians to demand full implementation for the education plan that came out of the Truth and Reconciliation Report to support Indigenous communities.  Past systemic education practices have brutally ravaged and destroyed the potential of generations of Indigenous people.  It is now time to move forward and undo the epidemic of lost potential.  The response must insists on dignity, community and positive self actualization.

Empowering women and girls through education must include the hiring of people who look like them and sound like them.  Never having a Black or Indigenous teacher, principal, superintendent, director of education, professor or academic advisor during their career as a student has an impact on how they orient themselves in the world.  Indigenous and Black students experience  a similar insensitivity to their culture and suffer disregard for their sense of well-being.  At this juncture in the road it is imperative that marginalized students have role models from their own ethnic communities as well as other ethnically diverse educators.