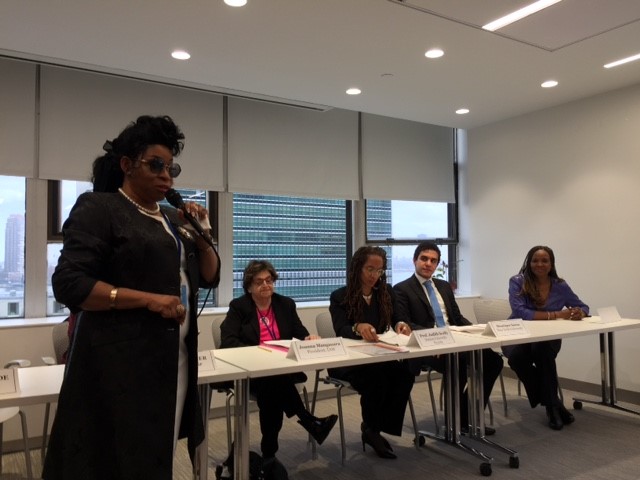 Henrique Sousa is a fine example of knowing and understanding gender mainstreaming – gender needing to be ‘mainstreamed in our thinking and doing.’

He aptly demonstrated his assessment of the topic, given his experiences from his home country Brazil.  “When it comes to social norms, we need statistics, and a breakdown of what is gender?….need an understanding of policies….to institutional powers..  its’ not proportional.  What are the nuances between a framework theory versus practice?”

Henrique’s probing questions were certainly acknowledged as evident  by the nodding of heads of the individuals in the room.

Another discussant, Joanne Manganara, President of IAW,  opened her remarks by stating, “Gender mainstreaming is integral to Beijing 2020, but there has been an uneven implementation on a global level ….very slow.”  From her perspective, investment in infrastructure is critical to free up women to give them more time.  These investments would result in:  1. increased productivity, with improved water and sanitation facilities; 2. better housing; 3. women farmers having food security; 4. improved electricity sources allows for domestic appliances and means less housework, freeing up their time; 5. increased mobility through transportation; and 6. increased physical mobility for job opportunities and higher paid jobs.

Urban development needs measurements to determine increased women’s outcomes in the above noted possibilities with critical investment in infrastructure and services.  Joanne suggested that a “gender blind” exists and “women need to be at the table.”  Gender economic development has to be based on a market approach but also considering the human rights of women.

Her final offering to the full room of attendees:  consider a new development model and put “people over profit.”

Professor Judith Scully from Stetson University, Florida, focussed on the definition and language of ‘gender.’  “Gender mainstreaming should be a process to policy, research, …”  It was her position that the definition of gender should be ‘fluid’ and that students want the binary terms of they, them, theirs and different types to be included in the definition.

Professor Scully contends these individuals are being marginalized and in the current climate of gender mainstreaming, there is a lacking and “no room for binary and transgender’ individuals, however it is dictated by universal rights.

“What can an individual do,” was a question posed by Deborah Ross to the audience.  Ms. Ross, an international dispute resolution/arbitration expert, offered the following advice:  1. start small in the sphere of influence; 2. mentor the next generation as we need mentors in every stage of our lives; and 3. constant education on the topic.

Final remarks for the gender mainstreaming session came from Meg Strickler, criminal lawyer.  Ms. Strickler, who in her practice witnessed firsthand gender disparity, stated, “take one bite, one step at a time.”