GREECE: Sexist rampage against resistance to memoranda. The case of the President of the Greek Parliament 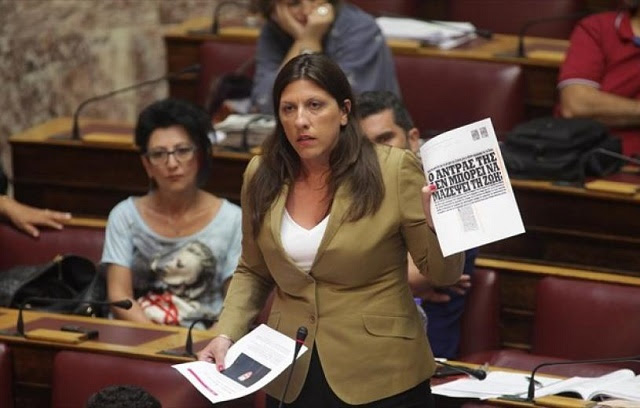 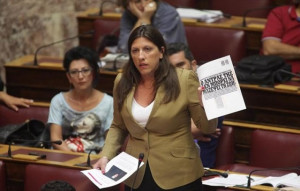 In the paroxysmal crisis that Greece is going through, we are witnessing an unleashing of an extremely violent sexist campaign against women. What is more, this is happening on the main political scene in full public view. We believe that this extreme and violent sexism, that is taking epidemic dimensions, differs significantly from the common day-to-day sexism of a more peaceful recent past, before the current debt crisis.

The former President of the Greek Parliament, Zoe Konstantopoulou, is both an emblematic figure and the main victim of this truly violent campaign. It is clearly no coincidence that the vigour, vulgarity and violence of this campaign have considerably increased since she created the Committee for the Truth on the Greek Public Debt, and since she has become the figurehead of the intransigent opposition to the submission of the Tsipras government to the will of Greece’s creditors.

Taking a closer look, we see that every day for the last seven months, all the declarations made by the President of the Greek parliament are presented as delirious by the mainstream media. Headlines like ’Yesterday’s Delirium from Zoe’, frequently replaced, in big gutter press headlines, by things like, ’Can’t Zoe’s bloke shut her up?’ With the 20 September election campaign in full swing the main private television channels have introduced a daily special “what they say” column in their principal news programme, which shows what the social media are saying about Zoe. It is filled with cartoons, it is often obscene and illustrated with unfairly retouched photos and nasty drawings from doubtful sources.

There is much worse. Even the MPs do not shy from calling the President of the Greek Parliament a “sexually frustrated orang-utan” or appeal to her husband who is a captain in the merchant navy “to quickly come ashore and calm her down”. The President of the Greek Parliament branded a newspaper headline in the parliamentary chamber, that called for her husband to “shut her up”.

We could continue a long list of these verbal and sexist attacks suffered by the President of the Greek Parliament. The case of Zoe Konstantopoulou is important because it is emblematic of a violent sexist offensive by various powers (political, apparatchik, media, mafia …) against the rebellious women who continue to claim their rights and the rights of the oppressed.  From the moment Zoe K. stepped up to become an important figure of the opposition to the Memoranda that have ruined Greece, she was denigrated, vilified, humiliated, slandered … in short, demonized by those that are on the Troika bandwagon. The attacks against her are so persistent, organized, coordinated and systematic that they can only be perceived as a real strategy of warfare aimed at her political elimination from the public arena.

This is a modern-day witch hunt!

It would be wrong to attribute this “extremely sexist phenomenon” to phallocratic or random individual behavior or anachronistic mentalities, as is claimed by the feminist politics section of the (old) Syriza in a statement entitled “The sexist attacks against Konstantopoulou are anachronistic stereotypes”. This is a modern-day witch hunt!

What does the witch hunt that developed at the dawn of capitalism have in common with the current violent sexist phenomenon, which can easily turn into a contemporary witch hunt? Witch hunts appeared in Europe around the turn of the 16th century, when capitalism made its first appearance. |2| It was characterised by the systematic diabolical presentation of women as witches in a period of crisis, similar to the current debt crisis, in which women take a front line part in revolts and resistance.

Today, as in those times, we are living in a period when production and reproduction relations are being reorganised in a way that is unfavourable to women. Those that have political powers, positions and visibility are totally unaware of this phenomenon.

At the time of the witch hunts women were excluded from the guilds, education and the common lands. They were isolated and locked inside the houses and bedrooms. Today they are run out of the public eye and pressed into the free service of those tasks that the welfare state has abandoned under the pressure of neoliberal austerity policies. The enormous savings made by the state is used to pay the national debt.

It is no coincidence that well known feminine stereotypes such as “A woman’s place is in her home” appeared at the time of witch hunts. Women who were not afraid to publicly say what they thought, who were sure of themselves, were criticised and said to be tiresome aggressive women who brewed trouble and disturbed the public peace. To be a woman involved in public affairs was a crime that deserved to be punished at the stake.

You may well think this is reminiscent of our present day austerity policies and authoritarianism, and you would be right. In today’s Greece of human and social disasters, all those who rush to the defence of the torturers and their inhuman policies (media, political parties, the establishment, corrupt politicians, occult circles of power, employers’ unions and even Mafiosi) play the most diabolical sexist cards to the limit, as never before, to smash the action of women who lead the struggles against austerity policies and the debt system, who defend migrants, refugees, the environment and the many victims of the currently applied barbarous policies.

This is the standard practice for establishing Mafia law, the law of the boss, the law of the pimp, sexual slavery and sex-trafficking. Fear is the tool, violence and torture are the means to wipe out the heart, soul, dignity and self-esteem of women to gain the unconditional control of their bodies to be sacrificed on the altar of maximum profits of the prostitution system.

That said, one can only be critical of the attitude of an institution such as the Tsipras Government’s General Secretariat for gender equality, created to protect all women who are victims of sexist aggression, that remained totally unmoved by the sexist lynching that the President of the Greek Parliament has been subjected to. This negative impression becomes worse when one considers that the victim is a highly visible public figure, a leader of the Syriza party of which the Prime Minister and the General Secretary are also members. This silence is surprising, and edifying, when we learn that the same General Secretary, who is so silent about the sexist attacks on the President of the Greek Parliament, rushed into action to condemn a daily newspaper that made sexist attacks on the Romanian Delia Velculescu, who is the current chief representative of the ’Troika’ that is imposing its dictatorship on Greece.

We have dwelt on this question because it is emblematic of the neoliberal period in which we are living. We think that to effectively defend our rights as a gender a new radical feminist movement must be conceived, that will grow out of the difficult struggles that women must fight against the social realities of this early 21st century, against the debt system and patriarchal fundamentalisms of all kinds. It is high time to create a new feminist movement that casts aside the present feminist trend that only deals with the political aspects of gender identity and refuses to acknowledge the connection between commonplace abuse suffered by women and class struggle as well as other forms of inequality and discrimination.

Conclusion: The sexism that is currently rampant in Greece is a fearsome weapon to divide struggles and to wipe out all forms of resistance. This is not only a women’s struggle, but a struggle that must involve us all, far beyond Greek borders.