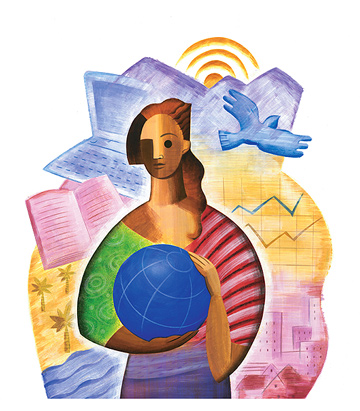 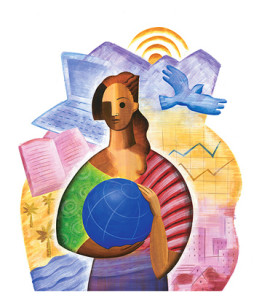 The financial crisis and the related economic recession is having a serious and widespread impact on the real economy in Europe. The crisis is having a differential impact on women and men given their differential positions within the economic and social sphere.

As a result of the crisis, gender inequalities in employment and incidence of part-time and temporary work have narrowed because of greater job loss and spread of flexible forms of employment among men. Although men’s employment suffered more in the early stages of the crisis since 2010 women have been equally affected. In spite of significant falls in female employment women’s labor market participation increased nearly everywhere. The male breadwinner model is losing ground as women’s activity rate increases and they shift from secondary earners to co or sole earners.

Austerity and fiscal consolidation policies more widespread in the second phase of the crisis have been accompanied by employment contraction, pay freezes and cuts and deterioration of working conditions in the public sector which is a major employer for women who account for almost 70% of public sector workers in the EU.

Austerity policies have also been responsible for the retrenchment of state support for working parents and the rights to long-term care of the elderly and the disabled arousing fears about a longer term retreat of the state from social reproduction.

Cuts in public services in particular child care services and benefits have a double impact on women. On the one hand women’s economic independence is compromised and their poverty heightened. Vulnerable groups of women as lone mothers, pensioners and migrant women lose the most.

On the other hand austerity is leading to a reprivatisation of care and a shift towards more familialist welfare systems where family members mainly women are expected to take over responsibilities that were once public.

Many European countries have changed pension rules in a manner that will have long term negative impact on women’s economic independence. Increases in the minimum contribution period for retirement on full pension and the calculation of pension on average career earnings rather than final salary penalize women because of their shorter working life and irregular working patterns. Increases in official retirement age, heavy penalties for early retirement have gendered implications too.

Gender equality is no longer a priority in the political agenda.

Austerity policies have had a drastic impact on gender equality bodies and women’s organizations.

• Gather information through assessments of the gender impact of the economic policy reforms. Establish a permanent system of gender budgeting.

• Ensure that there are no further cuts on public funding for women’s organizations.