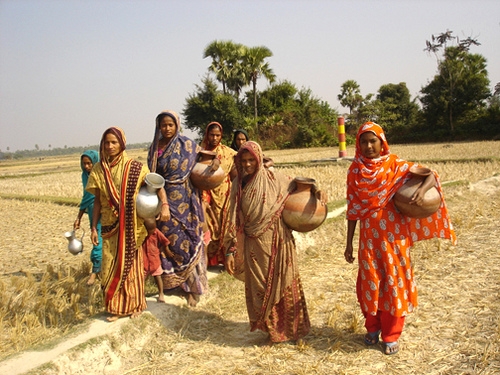 Inauguration speech by Joanna Manganara, the 14th President of the IAW

In her introduction, Joanna Manganara expressed her gratitude for the support she had been given and especially thanked the outgoing leadership for their work. She felt that she had learnt a lot from their example and looked forward to collaborating with the new board in the continued struggle for women’s human rights.

Now I would like to turn to the priorities that we set as an organization and to the challenges we are facing.

The world is undergoing significant upheavals with far reaching changes. We have new problems like the financial crisis, the Arab turmoil, climate change, the food crisis and other crises.

I think our priorities should be gender inequality and the feminization of poverty, which is exacerbated by the financial crisis. Women constitute the majority of the world’s poor. The majority of workers in the most vulnerable sectors – domestic workers, garment workers, subsistence farmers – are women. Women also suffer from climate disasters, for which they are least responsible.

The MDG’s did not address the root causes of poverty, most especially women’s inequality, which made it impossible for the goals to be truly transformative.

Moreover gender equality cannot be realized in an environment characterized by economic policies that do not respect human rights.

So we should monitor macroeconomic policies and evaluate them with regard to the principle of non-discrimination, gender equality and human rights.

Without doubt, the crisis has brought about changes in the economic policy discourse. The blind faith of economists, though not all of them, in the self-regulatory forces of the market has been shaken. So far, however, these changes have not been reflected in any corresponding substantial shifts in policies. Instead a trend towards business as usual is again becoming apparent.

Governments, therefore, have not provided an appropriate response to the dramatic consequences of the crisis. Changes in policies are not enough. There is a need for a more fundamental change of the dominant development paradigm. The current crisis reflects a model of development that is blind to environmental and human rights issues and confuses economic growth with progress in society.

Any new development framework must prioritize gender equality and women’s empowerment because of the pervasive injustice faced by women around the world and of the damaging impact of gender inequality on achieving other development goals.

So the new framework of the post-2015 Development Agenda should integrate macroeconomic policies, gender equality and human rights.

For the realization of women’s rights, it is critical to address the structural causes of gender inequality and poverty such as the pandemic of violence against women, unpaid care work, limited control over assets and property, unequal participation in public and private decision making, unequal access and completion of quality secondary education for young women,universal access to sexual and reproductive health and rights, access to decent work on an equal basis with men.

These are priorities in the context of the post-2015 Development Agenda. We have most of them in our plan of action. We could take initiatives on these issues either by ourselves or in collaboration with partners. We have to become more visible: Do more lobbying. Be more influential.

Our member organizations should continue to contribute to shadow reports in their respective countries and to the CEDAW Committee in Geneva ,contribute to the  Universal  Periodic  Report in the Human Rights Council which has wide media coverage. These are some of the initiatives that we can undertake.

Our vision is to create a world where gender equality is never in question and discrimination and violence against women and girls are things of the past.