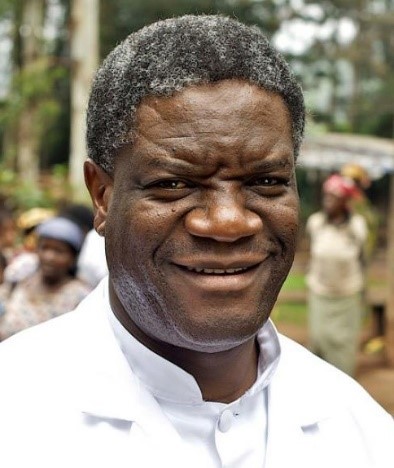 For the first time this year’s award deals with gender based violence, the most appalling crime against humanity. It is a strong voice condemning rape and other sexual assaults of women particularly as a weapon in military conflict and war. This unspeakably terrible brutality is often systematically used to threaten innocent people and to break the will of resistance of a whole population. Until now unlike other offenses this crime is usually belittled or covered up –the perpetrators get away with impunity, because the victims are just only women and girls…

Therefore the most prestigious award being given to Dr. Denis Mukwege from DR Congo and Nadia Murak from Irak marks a turning point in public awareness and sensibilization. Nadja from the Ezidis minority had been brutally raped and enslaved by the IS terrorists. After her escape as a victimized person she had courageously broken a wide-spread taboo:

Instead of keeping shamefully silent she spoke openly about her unbearable physical and psychological suffering. She accused the perpetrators as criminals to be brought to court for trial. Nadja Murak also strongly pleaded for reintegrating the women and girls within their own community and helping them to get again their self-confidence.

For IAW this award means an important step into the right direction, because the fight against sexual violence on women and girls is one of its most important global goals. Many IAW member organizations face these problems and are adopting strategies to stop these crimes.

But foremost in DR Congo the female population is exposed to these blatantly cruel excesses. For the public seminar in Berlin Anuarite Siirewabo, living in Buvaku DR Congo and coordinator of SOFEDEC, had sent a video-message. She gave a clear and moving description about the life of victims of rape, view her written original speech in French on the IAW-Website and the English summary here.

All of us present in Berlin will not forget Anuarite’s appeal:

“..The work of SOFEDEC is to help these women to forget the consequences of the war, and what they endured. We need funds for them and for the children born after these horrors. It is difficult to speak of all those women who have been raped, who died in the war. There are wounds deep in our hearts…”

Here Anuarite reports about a brutal incident on February 13th 2013: While she was at one of their hot-spots in Bisisi (Kalonge) she heard that two women were kept imprisoned and had to endure rape, beatings and torture in a house occupied by armed men. Anuarite having decided to go there, encountered some shepherds and the village-chief. They all warned her of the extreme risks of approaching that place. Despite of that Anuarite went on and got in touch with the chief of the armed groups. As a deal they just wanted a few drinks plus a goat. When Anuarite had fulfilled their demands, both women were released. Then Anuarite asked both husbands to accept the victims again as their spouses instead of abandoning them. Anuarite reassured them about the recovery of their wives after having been medically treated. Then Anuarite brought both women to the Panzi Hospital where Dr. Mukwege  “repaired” them. Today one former victim age 32 is the mother of several children, and the other aged 47 also leads a happy life.

Actually Dr. Mukwege and his team not only provide physical treatment but also psychological help after traumatic experiences. Anuarite and the SOFEDEC members visit the women later on in their homes and try to help them to be accepted again as full members of their families, a difficult job in a country, where rape victims are often ostracized!

No wonder that Anuarite was very happy, when she heard about the Nobel prize of Peace being awarded to Dr. Mukwege! In fact he upholds similar life-goals like Anuarite, which is helping the victims of rape, fighting against impunity of the perpetrators and preventing sexual violence.

Dr. Mukwege in his official speech as Nobel prize winner addresses all of us:

Taking action means saying ‘no’ to indifference…After twenty years of bloodshed, rape and massive population displacements, the Congolese people are desperately awaiting implementation of the responsibility to protect the civilian population when their government cannot or does not want to do so. The people are waiting to explore the path to a lasting peace…”

“The women of SOFEDEC, Solidarity of women for Development, Environment and Children’s Rights in DRC sound the alarm. They ask for your attention. The support they look for is nowhere else but in your actions, your donations and your strengthening of their capacity to subsist and to resist all the violence they have been victims of…Those brave women are busy looking for a living in their own country, not somewhere else. They are courageous, they do not shrink back, nor give room to fear….”

There were national elections on December 30, 2018 in DR Congo. Anuarite hopes that under the new opposition president Felix Chisekedi there will be some positive changes. Actually also Anuarite was a candidate in her home-prefecture, but she realized that generally women were not elected in large numbers. Anuarite points out that they are lacking the necessary resources for raising awareness about their issues during the election campaigns. One of the problems is also the poverty of women. Therefore women don’t have easy access to power. Nevertheless Anuarite feels that the Congolese women are strong and tenacious and will never abandon their goal halfway through.