The Village Project of DFR in Togo, Règion des Plateaux, in the First Place Helps Women 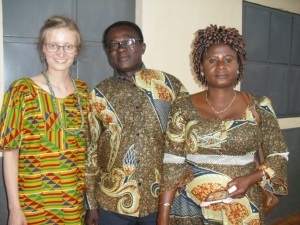 Deutscher Frauenring, DFR, for decades kept carrying on this project. In the years 1982 to 1985 I was travelling in Togo with Brigitte Pross, then a Vice-President of IAW. I soon became the main responsible  for the project CJDA, the Youth Centre at Danyi Atigba which first had as its mission to promote young people who looked for work in the cities. Stopping  the rural exodus was a priority with UNESCO and, more or less by chance, I got gift bonuses amounting to 6000 Deutschmark. This fund completed funds obtained from the German Development Ministry, BMZ, earmarked for the training of carpenters and for the salaries of two instructors. The buildings, planned and overseen by a German architect whose wife worked nearby for the German Development Service, DED, is the result of all these efforts. Our priority remained the training of seamstresses and the first eight machines were collected by my collaborators and sent to Togo on the sea route. This is the history of the CJDA in short. DFR up to now remained the only sponsor. Julia represented the DFR at the Centennial celebrations of EEPT, Evangelical Presbyterian Church in Togo, District of Danyi Atigba.

Togo’s women are famous for their clothes made of imported cotton fabrics –the preferences vary  from year to year.  Men’s gowns are also tailored from these fabrics. Festive clothes use fabrics in the traditional “royal” colours gold, red, green, blue.

Much has changed since Julia was in Atigba in 2011 as our intern. On the other hand she met friends from that time, for example. la Reine-Mère In the traditional hierarchy of a village she is the « first lady».

FODA, an administration unit for the promotion of the village facilities like the CJDA and the health clinic, did not convene during the discord about who should be  the next village chief after the death of the old one.

Technical progress Julia documented in her report is the electrification of the village and running water. The CJDA needs the e-current for the overlock machine acquired one year ago, the fridge to cool beverages, the TV set with DVD player for educational purposes and for the guests of the motel.

To reduce the cost, water from the cistern () is used in the sanitary facilities which belong to them–with a total of 8 guestrooms.

Income from the motel helps to balance the budget. This is also true for the fees paid by the apprentices

Julia had a full program including speeches in the hall of the the CJDA’s main building.  For example, the Director was in action as one of the speakers at the festivities which started in the morning with a festive service in the EEPT. A light meal followed in a nearby school, with more speeches and plenty of guests. An extraordinary meeting of our partners with Julia, a thorough visit of the CJDA and a stop to chat with the apprentices and to encourage them, as well as visiting the local Health clinic with its village pharmacy which is also on our list of donations. Togo’s health system lacks the means to provide enough medicine, we help with generics.

The wish to have many children persists, above all with male inhabitants. Women who rear them, have to cope with everyday chores and earn money, often cultivating a patch of land, could do with fewer children.

To change their lot we recommend to work in Atigba and elsewhere, with the picture box

The future belongs to those who get up early

At this time of the year downpours are frequent, in Atigba, in Lomé, nearly everywhere in Togo