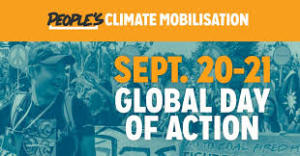 International Alliance of Women (IAW) joined the UN Climate Summit 2014, hosted by UN Secretary General Ban Ki-moon in UN Headquarters in New York, US on 23 September 2014.  The Summit brought together over 100 Heads of State and 800 leaders from government, private sector, and civil society.  The Summit laid solid foundation for successful negotiations under the UNFCCC, catalyzing concrete commitments for action on the ground, and raising political support necessary to reach a universal agreement on climate change in 2015.

At the opening ceremony, a woman civil society leader and a mother from Marshall Islands Kathy Jetnil-Kijiner recited a poem dedicated to her baby daughter—making a promise that she will not be a climate refugee and will have a safe home—as the future survival of island States depends on climate action now.  UN Secretary General Ban Ki-moon stressed: “Climate change is a defining issue of our age, of our present. Our response will define our future…That is why I have asked you to be here today. Thank you for your leadership. I’m asking you to lead.”

Heads of State made announcements on national climate action and ambition. President Obama stated: “This is something that President Xi of China and I have worked on together.  Just a few minutes ago, I met with Chinese Vice Premier Zhang Gaoli, and reiterated my belief that as the two largest economies and emitters in the world, we have a special responsibility to lead.  That’s what big nations have to do.” President Obama stated that America will meet the emissions reduction target of 17% below 2005 levels by 2020 and early next year will announce next target.  Vice Premier Zhang Gaoli stated that China has adopted national plan on climate change to ensure a 40-45% reduction in carbon intensity by 2020 from 2005 levels and will announce post-2020 ambition as soon as possible.  Vice Premier Zhang Gaoli stressed the importance of building consensus and implementing actions for a cooperative and win-win global climate governance system.

130 women leaders attended the “Leaders’ Forum on Women Leading the Way: Raising Ambition for Climate Action,” co-hosted by UN Women and the Mary Robinson Foundation – Climate Justice on the eve of UN Climate Summit on 22 September 2014, including President of Chile, H.E. Michelle Bachelet, Her Majesty Queen Rania Al Abdullah of Jordan; First Lady of Peru Nadine Heredia de Humala; Member of the Elders Graça Machel; former Prime Minister of Australia Julia Gillard; former President of Finland Tarja Halonen; former President of Malawi Joyce Banda; former Prime Minister of Norway Gro Brundtland; former Prime Minister of New Zealand and Administrator of the UNDP Helen Clark; and leaders from indigenous groups, civil society, youth groups, private sector, and government.  Women leaders discussed in roundtables—using traditional learning circles methodology—their commitment to ambitious climate action and gender equality, recognizing the power that women have, taking ownership and responsibility, demanding accountability and access to decision making.  “Women need to be empowered, it means that they need to be at the decision making table. Women are working on the grass-roots level, where on the daily basis they are facing impacts of climate change, so there is no viable solution if they are not at the decision making table” said former Prime Minister of Senegal Aminata Touré.

One of the thematic discussions during the Climate Summit, “Voices from the Climate Front Lines”, Co-Chaired by President of Bolivia H.E. Evo Morales and Prime Minister of Tuvalu H.E. Enele Sosene Sopoaga, focused on giving voice to women, young people, children, and indigenous people, highlighting their leadership for climate solutions and resilience. Organized by UN Women, UNFPA, and UNICEF, the session included young women panelists and agents of change from Nepal, Solomon Islands, and Uganda.  President of Bolivia H.E. Evo Morales presented Bolivia’s proposal for the UNFCCC 2015 climate agreement— “Climate Resilience and Sustainable Development Mechanism” based on: development in harmony with nature; integrated ecosystem management; significant reduction of carbon emissions; integrated management of systems addressing climate risk; and eradication of extreme poverty and reducing gender inequality and inequity between peoples.  During the event, UN Special Envoy for Climate Change Mary Robinson held up a book and said “This is my book. This is the Universal Declaration of Human Rights. Climate change is all about human rights and unfortunately it is making a lot of human rights worse.”

IAW marched in New York, together with 400,000 women and men from all over the world for People’s Climate March on 21 September, 2014.  On the same weekend, 2646 climate change events were organized in 162 countries, including marches in Kathmandu, Melbourne, Sydney, Jakarta, and London.  Mary Robinson, called the people’s climate justice movement “a revolution,” and called on us to keep it up, because political leaders respond to pressure from the people.  IAW marched in solidarity to spark a momentum for climate change action, and now we have to keep this passion for change and to make sure that leaders keep their promises for COP 20 in Lima later this year and COP 21 in Paris in 2015.