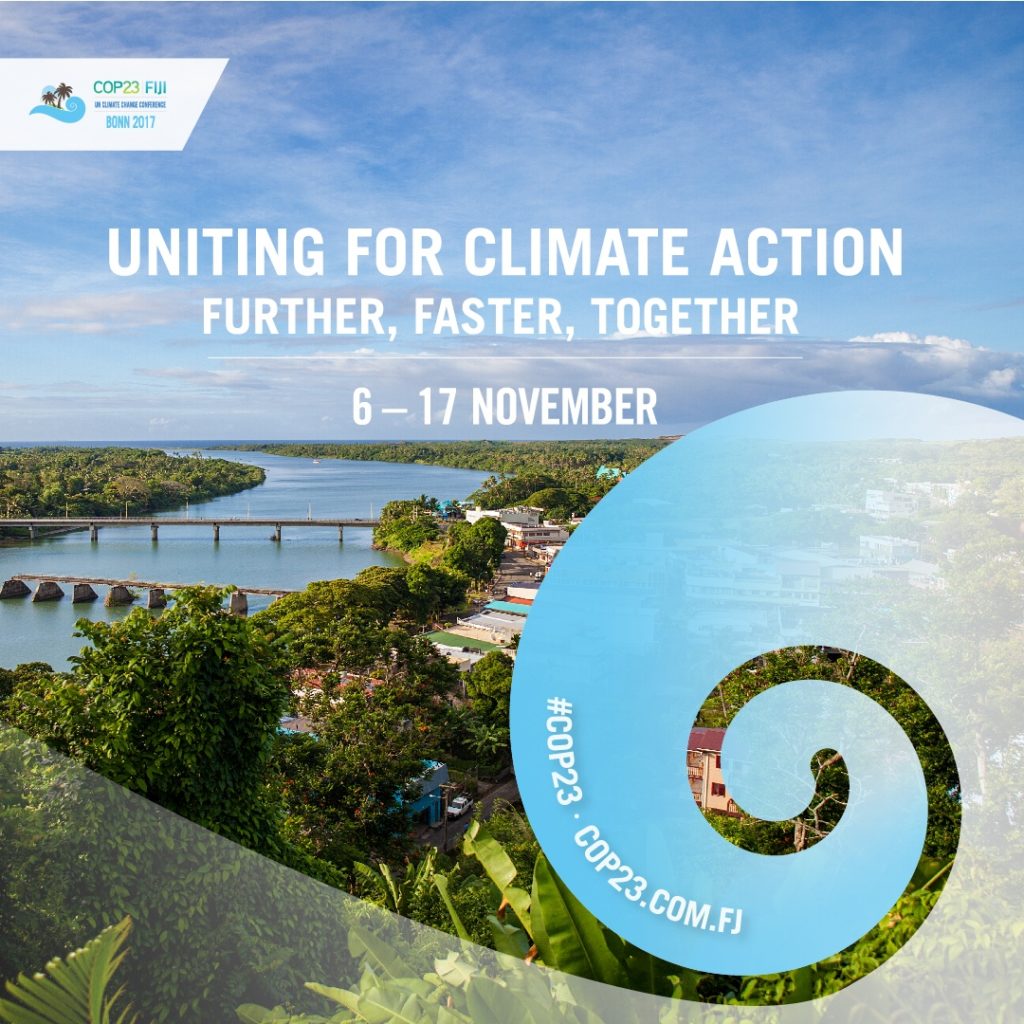 At the opening on November 6, 2017, the Prime Minister of Fiji and COP 23 President H. E. Frank Bainimarama and the Minister for the Environment, Nature Conservation, Building and Nuclear Safety of Germany H.E. Barbara Hendricks presided over a traditional Fijian ceremony, the Qaloqalovi, with the presentation of the Tabua, the tooth of a sperm whale, singing, and drinking of kava, a traditional Fijian drink. The UNFCCC Executive Secretary Patricia Espinosa called for great urgency and increased ambition on climate change. 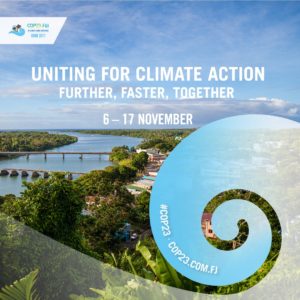 Fiji is the first Small Island Developing State (SIDS) to preside over climate change COP. Fiji, comprised of more than 300 islands in the South Pacific Ocean, along with other SIDS, are among the most vulnerable countries to climate change impacts. At the same time, SIDS are the smallest contributors to global carbon emissions. Many low lying SIDS are slowly sinking; coupled with extreme weather conditions, some parts of islands are becoming inhabitable, creating waves of climate refugees. Fiji has experienced many negative effects of climate change including extremely intense storms (Tropical Cyclone Winston in February 2016 causing over $1bn in damages), sea-level rise (causing the relocation of 80 villages to higher ground), and warming seas (causing changes in fish populations and bleaching of coral reefs).

COP 23 made history when Parties recommended for adoption the first Gender Plan of Action (GAP) for the UNFCCC on Tuesday, November 14, 2017.

The GAP seeks to advance women’s full, equal and meaningful participation and promote gender-responsive climate policy and the mainstreaming of a gender perspective in the implementation of the Convention and the work of Parties, the secretariat, UN entities, and all stakeholders at all levels. The GAP contains five priority areas, with activities that will drive the achievement of its objectives, and timelines for implementation between 2018 and 2019.

A.1 Workshops and technical assistance to enhance the capacity of Parties and stakeholders to develop gender-responsive climate policies, plans, and programmes

A.2 Submission and dialogue on the systemic integration of gender-sensitive and participatory education, training, public awareness, public participation and public access to information into all mitigation and adaptation activities implemented under the Convention and the Paris Agreement

B.1 Promotion of travel funds to support the participation of women in national delegations at UNFCCC sessions, including from grass-roots, local and indigenous peoples, developing countries, and SIDS

B.2 Include in regular notifications to Parties at the time of nominations to UNFCCC bodies the latest report on the gender balance

B.3 Organize and conduct capacity-building training on leadership, negotiation, facilitation and chairing in the context of UNFCCC process for women

C.1 Dialogue for Parties and observers, with the chairs of UNFCCC bodies to discuss outcomes of the technical paper and recommendations

C.2 Provide capacity-building to chairs and members of UNFCCC bodies and technical teams of the secretariat, supporting the integration of gender into their work

D.1 Invite the Standing Committee on Finance to host a dialogue on the implementation of its commitment to integrating gender considerations into its work

D.2 In cooperation with UNEP DTU Partnership and the Climate Technology Centre and Network, invite interested stakeholders to share information on the incorporation of gender into technology needs assessments

D.3 Strengthen the capacity of gender mechanisms, including for parliamentarians, the IPU, commissions, funding ministries, NGOs, and CSOs, for the integration of gender-responsive budgeting into climate finance

E.1 Make a submission, including sex-disaggregated data and gender analysis:

(b) Integration of gender considerations into adaptation, mitigation, capacity-building, Action for Climate Empowerment, technology and finance policies, plans and actions

E.2 Prepare a synthesis report on the submissions under activity  E1

E.3 Update report on how the Climate Technology Centre and Network, working with the Technology Executive Committee, contributed to accelerating the development and transfer of technology with gender considerations

E.4 Encourage knowledge exchange activities among the secretariat staff across all thematic areas to update on gender work

The recommendation for adoption of the GAP coincided with the Gender Day at COP 23 on Tuesday, November 14, 2017, that included networking breakfast on capacity building, and a high-level event on making the economic case for gender-responsive climate action. COP 23 featured many events on women and climate change organized by Parties, women’s groups, civil society, and other stakeholders, that included frontline conversations with Pacific women, and recognizing women human rights and climate defenders.

A highlight was an aerobics class, organized by the Women and Gender Constituency, on Tuesday, November 7, 2017, to call on COP 23 delegates to “mind the gap” of gender inequality and “reach” for a gender action plan. The aerobics class lightened the mood in often testy climate change negotiations, facing polarizing issues and difficult constructive discussions on the way forward.

The Women and Gender Constituency advocated for the Key Demands at COP 23, including the GAP, loss and damage, finance, rights-based platform for indigenous peoples and local communities, rules for community consultation and consent, gender justice, ecosystem-based approaches, ocean, water, and health, including sexual and reproductive health and rights.