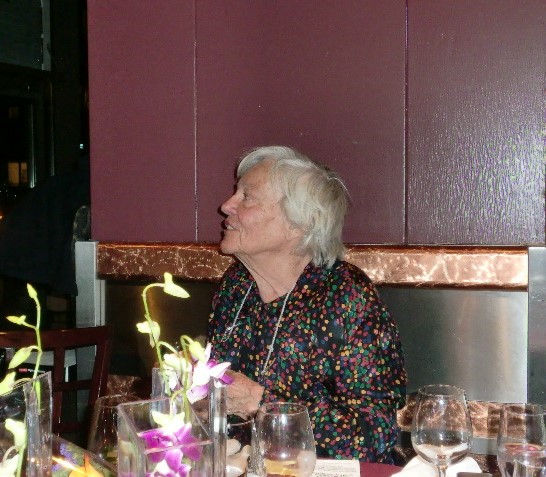 Kay Fraleigh became a Board Member of IAW in 1976, and from 1989 to 1996 she served as Vice-President. Since then she was IAW Honorary Vice-President. Most important perhaps was her role as main representative of IAW to the UN in New York

Kay’s primary job, in her own words, was to “deliver the IAW message and to bring back to the IAW the UN thinking related to the advancement of women”. However, she did much more than that. Under her leadership, the International Alliance of Women became a trusted and knowledgeable voice among the many NGO voices in New York. Rosy Weiss, President of IAW 2004-2010

Kay’s death is a tremendous loss to IAW. She was so cheerful and positive and very knowledgeable!
My memory of her is being a member of the Constitution Committee when in 1998 I was made convener at the post-congress Board Meeting in New York. It was much to my surprise to find that work given to me, I was only a recent member (1996). Kay was a fantastic help. The existing Constitution was very old, still gave three terms to Board Members. Kay was adamant: “We make that two terms, we don’t want hangers on”. Over quite a few Board Meetings we made a very different, democratized document, which was finally passed at our centennial in 2004.
Kay was certain that her surname Fraleigh came from Vrolijk, the Dutch word for cheerful. To judge by her disposition this Dutch friend is ready to believe her. Lyda Verstegen, IAW President 2010 – 2013

Kay’s warm and generous hospitality welcomed everyone to parties in her room, in larger spaces in hotels where we could all meet and at her home in Queens.   I met Kay when Women’s Electoral Lobby and the League of Women Voters hosted the 1989 Congress in Melbourne and started to understand her dedication to IAW and its work.  During the 1999 Congress in New York, Kay’s office at CCUN became our headquarters.    Priscilla Todd, editor of International Women’s News

Kay was such a stalwart at CCUN and in many ways was responsible for its setting up as NGO headquarters at the UN.  It has been such an important centre for decades and for IWTC, it most definitely provided us with a central location for our activities throughout the years between the first and last UN World Conferences and NGO Tribunes on Women stretching from 1975 to 1995. Kay was central to all of that and will always be remembered for the part she played.     Anne S Walker, Executive Director, International Women’s Tribune Centre 1976-2002

That makes me so sad.   I adored her.   Kay was the life and soul of IAW.  What one looked forward to most each time was meeting up with Kay and her entourage again. She would buy a mountain of food (and booze) at the airport and begin the session with a party in her room.    Helen Self, long standing member of IAW

She was so vibrant and I have very vivid memories of her.  I loved her company.  I think the last time I saw her was in Paris about ten years ago…we all jumped into a cab and went to the Rodin Museum together.  I also remember being on a small tour bus with her and Jim and a few others in 2000 in Sri Lanka…It was hideously hot…one day, I chickened out and stayed in the bus but she and Jim soldiered on…one of them ended up with sun stroke!   What a lot of adventures we had in IAW.
She was devoted to her work for IAW   Pat Richardson, Former IAW Membership Secretary

Obituary : Published in The New York Times on August 4, 2019

FRALEIGH–Kathleen Sophia, a leader in women’s global advocacy, died on August 2, 2019 in North Bergen, N.J. She was 92 years old. Kathleen, best known as Kay, was born on October 10, 1926, in Manhattan to James and Gertrude (nee Finnegan) Fraleigh. Kay served as the chairwoman of the Committee on the United Nations Decade for Women from 1975 through 1985, during which UN Women’s Conferences were held in Mexico City, Mexico (1975), Copenhagen, Denmark (1980) and Nairobi, Kenya (1985). From 1982 through 1991, Kay also served as chair of the Non-Governmental Organization (NGO) Committee on the Status of Women, New York, which supports the work of the United Nations Commission on the Status of Women and UN Women. Additionally, she was an International Alliance of Women permanent resident to the United Nations.

Kay was a lifelong adventurous traveller. After retiring, she spent several months each year in Calpi, Spain with her husband, Jim, whom she married in 1988. She will be remembered by family and friends for her cheerful, optimistic spirit. Kay was predeceased by her husband, James H. Potts, and her brother, James B. Fraleigh. Her ashes will be interred at Cutchogue Cemetery in Cutchogue, NY.  In lieu of flowers, the family requests that donations be made to United Methodist Women. The family would like to thank the staff at Hudson Hills Senior Living, who cared for Kay during her final years.

Read also the very personal “Tribute to Kay” by Denise Scotto, a friend of Kay’s and of IAW.
Tribute_to_Kay_Fraleigh-Denise Scotto