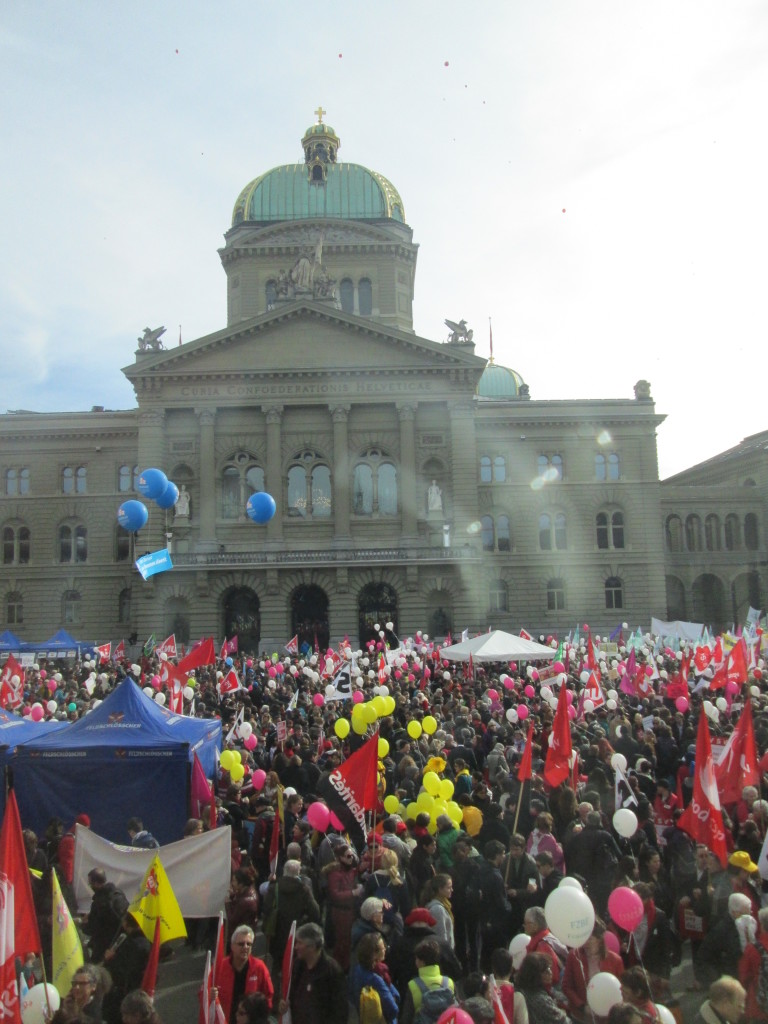 A very beautiful and powerful demonstration!
7th of March, a sunny day in Berne, the Swiss capital.

Around noon more and more people in colourful outfits were gathering in the small park near the railway-station. The predominant colour was red as a sign of anger, but also some bright pink as a symbol of feminism was seen.

Here were women and also some men coming from all walks of life, national organizations of women, professional associations, unions and political parties.

They all came together for a spectacular march requesting “Equal Pay Now”!

For  34 years equal pay has been  anchored within the Swiss federal constitution. However, even today there is a wage gap of  18,9% between women and men. So now the women urgently want the full implementation of this law. They have been waiting for too long.

A difference of 18,9% means an  average yearly shortcoming  of CHF 8000 (at the moment 1 franc is equivalent of 0,93 euro).Women are short of that money now, but  the situation will have a negative impact on their future  pensions.

This was also the main point when the Swiss Association of Women’s Right ADF-SVF was addressing the people participating at the march:

“Women are fed up with waiting, fed up with the reforms at the speed of a snail,fed up knowing that unfair low wages will  endanger future pensions, fed up  being treated badly, fed up  doing the greater part of the unpaid care-work, fed up by so-called which actually  burden women more  and fed up that  women are the poor ones in a rich country.

Here they all were together united for the International Women’s Day.

This march going through the old city of Berne to the Federal Building, seat of the Swiss government, was very inspiring  both because of convincing slogans and  uplifting rhythms of music bands. More than 12,000 persons were participating (a big success, considering the total population of Switzerland is around 8 millions).

“Liberty – Equality – Solidarity” were the key-words of the day.

Coming to Berne was facilitated by special trains offered free of charge.

Thanks to an excellent management preparing this huge  project the demonstration became a very powerful event widely commented on in the media and voicing strongly the urgent demands of  women.

Of course we all are very happy about this success. However, we are still angry about this scandalous discrimination. So it is urgent that continue the this struggle – and of course ADF-SVF suisse will keep on working for our goals