We want the best Agreed Conclusion ever passed at the CSW. 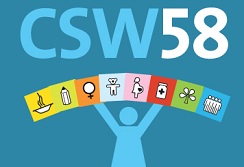 By Soon-Young Yoon, UN representative International Alliance of Women
and Chair, NGO Committee on the Status of Women

On 9 March this year, a standing room only crowd of more than 900 gathered at the Great Hall of Cooper Union for Consultation Day—the largest of 300 NGO events held in parallel with the CSW this year.  During that extraordinary gathering of civil society, Sharon Bhagwan Rolls—a Fiji Islander, talked about her vision for using media and communications to empower women and girls. As a young woman, she joined the Fiji government delegation to the UN Fourth World Conference where she filed news reports for Fiji television. She worked her way up the ranks in radio to become an award-winning copywriter and radio station manager. During Fiji’s violent coup, Bhagwan Rolls led the Blue Ribbon peace movement calling for non-violent protest in the tradition of Mahatma Gandhi. Tonight, at the NGO CSW Forum reception, we will present Sharon with our annual Woman of Distinction award for her outstanding leadership.

Sharon is an example of one woman’s journey to this CSW. In the next two weeks, you will see more like her– thousands of NGO participants who are volunteering their time—and often paying their own way– to tell the world their stories, and bring their urgent messages to the UN.  They fight for the rights of women and girls living with disabilities, and HIV/AIDS. Faith-based groups, foundations, men and boys’ organizations will add their voices. Advocates for indigenous women and girls, rural women, widows, lesbians, gays and bisexuals, migrant workers, victims of violence and cancer survivors are calling for governments and the UN to speed up progress. The hundreds of NGO events include training workshops, films, an artisanal fair, and expert panels. This Friday, hundreds of us will march down Second Avenue to celebrate the theme of the first Women’s Decade of “Equality, Development and Peace”. We invite everyone in this room to join us at the Dag Hammarskjold Plaza at 12:30 pm.

What do we expect from this CSW? As one woman put it, “We want a high return for our investment”. My organization, the NGO Committee on the Status of Women, New York estimates that every year, the women’s movement contributes nearly two million dollars and thousands of volunteer hours to make the CSW a success. So above all, we want the best Agreed Conclusion ever passed at the CSW. With all of the talk of “push back” and “roll back”, some governments have settled in for mediocre results. The women of the world are in no mood to “settle”.  Indeed, we expect that this year’s Agreed Conclusions will enlist us to count women’s unpaid work, place gender equality and women’s empowerment at the heart of invigorating economic growth, give a green light to all girls to move into new political spaces, and inspire us all to scale up and speed up progress on universal health care coverage.

It’s long past time for governments to communicate truth with clearer messages. Yes, we need a stand-alone goal for gender equality and women’s empowerment in the next UN development agenda.  The Beijing Platform for Action and the Convention on the Elimination of All Forms of Discrimination against Women—adopted so long ago remain the women’s movement’s blueprint for the post-2015 agenda. There will never be sustainable development if there is no food security in the home. No country is at peace if domestic violence is rampant. And equality under the law means nothing if women do not have a voice at home.

We draw your attention to the growing importance of cities. By 2050, more than 80 percent of women will live in urban settlements. All challenges in the future related to disaster management, violence against women, education, health care, and political participation will be decided in cities. Indeed, if our city leaders do not get policies right, it will have disastrous effects on rural economies and sustainable livelihoods.

Beijing + 20 will be launched at this CSW and our global campaign will continue through the GA high-level event in September 2015.  This year, the United Nations must uphold the highest ethical standards for gender equality and women’s empowerment because—ultimately—that can set the high bar not only for government policy but for changes in personal conduct as well. If these standards are upheld, if truth and clarity replace obfuscation and timidity, then somewhere after Beijing + 20 is over, a young woman or man can look back at what we have done and say “I’m proud that I was there”.