Working with the UN as an NGO 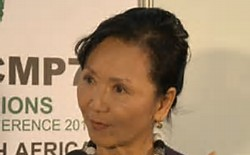 For the past 15 years, I have been the main UN representative for the International Alliance of Women based out of New York. I joined the IAW because I believed in its mission—to uphold women’s human rights and work for equality, development and peace. We are a network of hundreds of networks, working in English and French, covering the globe in all regions and we have been mobilizing women for a very long time.  IAW was founded in 1902 during the turbulent years of the suffragist movement and the early years of the League of Nations. IAW gained its general consultative status with the UN Economic and Social Council as one of the first organizations to be granted this status in 1947. That accreditation was an important recognition of our mission. Remember that when the UN Charter was signed in 1945, only 47 countries guaranteed women the right to vote. There was no national legislation banning child marriage. Ministries of women’s affairs and gender equality did not exist.

Through the years, I have witnessed how women’s leadership and expertise can help influence the UN. Let me make a general observation about what I have learned. Many NGOs think that if you want to influence the UN, the best place to do that is in New York, Geneva and Vienna. From my experience, the regional UN economic and social commissions are increasingly where major political, social and financial decisions are made. ESCAP, ECLAC, ESCWA, and the ECE often regionalize global consensus policy documents according to their own priorities. We have a Universal Declaration of Human Rights, but the Africa region also has its own African Charter on human rights that outlines how that document applies to regional realities. That is why I fully endorse the idea that NGOs should work more with ESCAP and other UN bodies at the regional level.

In addition, the UN has a strong presence in many other countries which means that NGOs need to be there as well. The IAW has representatives who are assigned to the Food and Agriculture Organization in Rome, UNESCO in Paris, the UN Environment Program in Nairobi and the International Criminal Court in the Hague.

During the world conferences on social and economic development in the 1990’s all centers of the UN were engaged in all countries. In New York, the NGO Committee on the Status of Women/NY was proud to be a part of CoNGO when the substantive committees in New York, Geneva, and Vienna joined together to plan an NGO Forum at the UN Fourth World Conference on Women. That historic gathering of more than 50,000 women and men, girls and boys, produced the Beijing Platform for Action with 12 critical areas of concern. These covered the girl-child, political, economic, social and cultural rights, the media, health and education.

The feminist and women’s movements at that time gave governments the political momentum and expertise it needed to arrive at a global consensus. The regional networks were critical in achieving consensus on this document agreed to by 189 countries. At one regional preparatory meeting for the Arab/MENA region held in Amman, I saw government delegates had two documents they used in negotiations—a regional NGO document and the UN one. In this region, one of the co-leaders was the Pan Pacific Southeast Asia Women’s Association, an NGO who has helped bring us together, today. Thank you to Thanpuying Sumalee for her contribution to our process.

More recently, I have served on behalf of the IAW as chair of the NGO CSW/New York. Like our sister committees, we help to create open, democratic spaces for civil society, interacting and contributing to the UN. This includes more than so-called “women’s meetings” and extends to events of the Human Rights Council as well as the High Level Political Forum that will review the UN Sustainable Development Goals this July in New York.

Our activities at the UN are particularly intense during the annual meetings of the UN Commission on the Status of Women. Last year, we scheduled more than 400 side events so that around 6000 NGOs could speak, network, and strategize around the UN CSW’s theme: “Women’s economic empowerment in the changing world of work”. The Final Outcome document was the result of intense lobbying so that advances were made.  Governments agreed that women’s economic empowerment contributes to a more diverse, rich leadership in all sectors, including in rural communities and the private sector. We also asserted that without women’s active participation and leadership can help boost the GDP and that attaining the SDGs will not be possible without gender equality.

I have shared these experiences to give you a glimpse into how partnerships with the UN can work from the point of view of civil society. But based on my personal experiences, let me also tell you how this relationship might look from inside the UN.

In 1979 I moved from New York to Bangkok to work for Unicef as a Social Development officer affiliated with an ESCAP economic planning institute. It was my first UN assignment—one that was a dream come true. My job as an anthropologist was to help the regional office for Southeast Asia support our projects for women and children—doing evaluations, social science training, and contributing what I knew about women’s leadership from academic research. That experience changed my life and how I understood the United Nations.  Here’s why.

I travelled to some of the most remote, poverty-stricken regions of Southeast Asia and Pakistan where I found the UN doing some of its most important work to lift women out of poverty. In the early 1980’s I evaluated an obscure Bangladeshi NGO known as the Grameen Bank. Back then, it was a small project begun by Muhammed Yunnis, a dynamic leader with a humble appearance and mild manner. He wanted to see if banks could give women credit directly, thus circumventing expensive middlemen. The problem was that few women owned their land or homes because these were registered mostly in the names of their husbands or fathers. To sign their papers, they often used their thumbprints for identification because most of them could not read or write. Nevertheless, repayments were so high that the reputation of the Grameen bank reached far and wide.

Fortunately, Unicef encouraged Yunnis and supported this project in its early stages. I think you know the rest of this story. Yunnis eventually won the Nobel Prize for this work and the idea of micro-credit has changed banking around the world.

What did I learn from that experience? At its best, the UN nurtures innovative ideas and gives them a chance to be shared with the rest of the world. Although it may not always succeed, the UN can take risks with new ideas when governments or private donors may be reluctant to act. Once inside the UN system, the seeds of innovation can be shared across cultural and language boundaries and grow before the eyes of a world community. I don’t know of any other institution where this can happen at such a rapid speed with a global impact.

This brings us to my final thought about NGO/UN partnerships. The UN is fascinating because it is like a global university where all stakeholders –governments, the private sector, UN diplomats and staff, as well as universities, and NGOs — are teachers and students at the same time. Furthermore, this happens in small communities, at national and regional levels as well as at UN world conferences. We support each other in many ways—sharing human, financial and intellectual resources. Through our partnerships, we collectively add to a wealth of global knowledge that is a legacy for the next generation.