Violence against indigenous women and girls 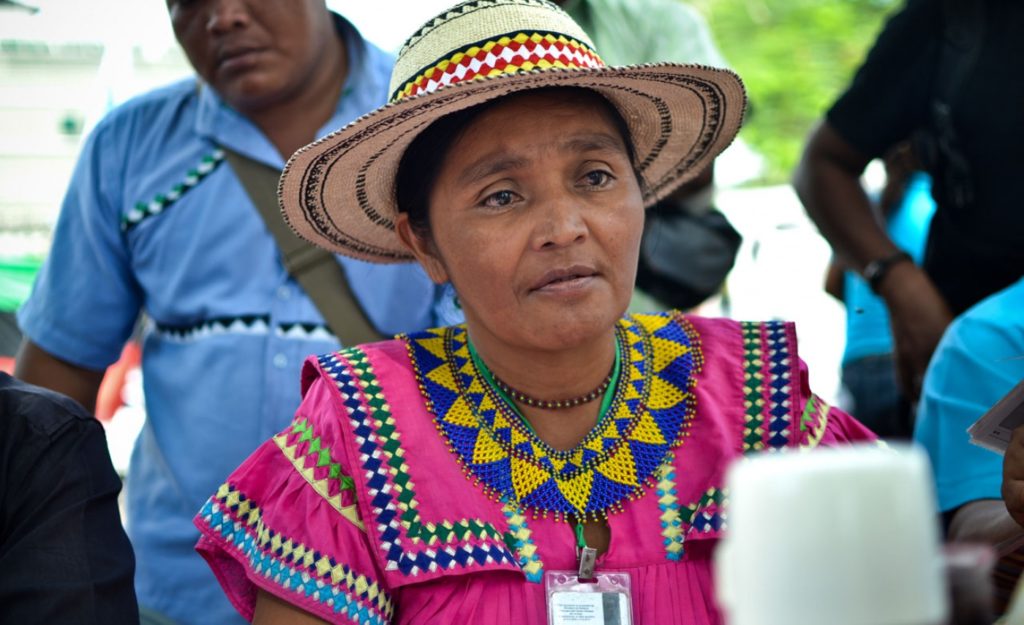 Last year in the Palais des Nations in Geneva I saw a photo exhibit of indigenous women. They looked great and seemed to have a good life and many friends.

Therefore I was shocked at the figures presented yesterday (20 September) during a panel discussion on Violence Against Indigenous Women and Girls, including those with disabilities  (vaiw). The aim of this panel was to assess the development of legal and policy responses to violence against indigenous women, based on art. 22 of the UN Declaration on the Rights of Indigenous Peoples, and identify good practices and challenges in addressing structural forms of vaiw.

Adam Abdelmoula, director of the Human Rights Council and Treaty Mechanism Division, Office of the High Commissioner for Human Rights, opened the discussion. He said that there was ample evidence that indigenous women and girls are at disproportinate risk of physical, emotional and sexual violence, of being married as children, of being trafficked, of undergoing forced sterilization, or of being exchanged for a bride price in some parts of the world. They suffer from discrimination, both within and outside their communities because of their unequal position in society. Vaiw can not be separated from broader violations of indigenous peoples’ rights, including rights to their lands and resources. This is another cause for violence.

Access to justice is a key to reduce vaiw. That is impeded in various ways, but sometimes it is a success, as the Sepur Zarco case in Guatemala showed that access to justice for the gravest violations of women’s rights could be achieved: for the first time in the history of Guatemala, sexual violence committed during the military conflict in the 1980s has been successfully prosecuted, leading to the conviction of two former members of the military to 360 years in jail for the murder, rape and sexual enslavement of indigenous women. Yet, not many indigenous women get past the barriers to justice, because they don’t know their rights and the services and protections available to them, because those services do not exist, because of sheer discrimination, or because of  mistrust in the judicial system. No wonder that they don’t trust the system, they are often treated as offenders, and they are not believed if they come to complain. There are not many data available, but those we have are alarming. In Australia 2% of the female population are identified as Aborginal, yet indigenous women make up one third of the female prison population.

The panelists added to this sad story: The President of the Sámi Parliament of Norway, Ms Aili Keskitalo, said that 48% of Sámi women had experienced some kind of violence during their life, as opposed to 29% of the members of the general public. The issue of vaiw cannot be solved in isolation. The reasons for that violence can be found in gender imbalance, and power and lack of power within indigenous peoples, and between indigenous peoples and majority communities. The loss of languages, culture, resources and territories that often accompanied colonization and assimilation policies put great pressure on indigenous peoples’ own mechanisms for conflict resolution, and make indigenous women and children vulnerable.

What the Member States should do to empower indigenous peoples is implement the UN Declaration. States must also provide immediate appropriate assistance to indigenous women, children and persons with disabilities in the form of culturally sensitive protection, health care and legal assistance in their own language to the victims of different kinds of vaiw. The Human Rights Council should keep the matter high on its agenda.

Education, in general, and for everyone about violence, education of the police, lawyers and judges about the rights of indigenous women would help to put an end to vaiw, was the message of the Graduate Women International, supported by IAW.

Therewith GWI echoed Olga Montufar Contreras from Mexico. She advocates for disabled people. Human rights covenants need to be read in a systematic way regarding women and girls with disabilities. Those women and girls suffer from multiple forms of discrimination. Many of them have been taught to be grateful for favours of being given some attention. Asked about their expectations in a survey, they did not expect much. Then they had a training on their human rights, nevertheless, in a repeated study, they did not consider verbal violence, rejection and coercion as violence against them. If women don’t know their rights, they cannot defend them.

Hannah McGlade, Office of the High Commissioner for Human Rights Senior Indigenous Fellow, said that Aboriginal women and girls of Australia face unacceptably high levels of violence. Aboriginal mothers are 17,5 times more likely to die from homicide then  non-Aboriginal mothers, and they are also at increased risk of suicide related to intimate partner violence and sexual abuse. The lack of responsiveness of the justice system is a major issue faced by aboriginal women. Fortunately Australia has made a commitment to combat violence against women, including indigenous women, through a National Plan of Action.

Australia must ensure equality before the law and further develop a strategy and policy to increase access to justice, ensure the full participation of indigenous women in the administration of justice, and develop human rights programmes aimed at the enforcement officials and the judiciary.

In the discussion States with and without indigenous peoples within their borders intervened. Ecuador with 14 different indigenous nationalities and 18 ethnicities in the country said that it had taken measures to foster the participation in policy formulation and in political life, including through affirmative action on employment of indigenous women with disabilities in the public sector. Guatemalmajoritya had put in place measures to prevent gender-based violence and had created an office of the Ombudsperson for indigenous women, DEMI, which sought to tackle viaw as a community issue rather than an individual issue.

Fiji had a singular problem: as a country with an indigenous majority in the population they had trouble saying that between indigenous people there was a higher incidence of violence.

The Council of Europe reminded that its Istanbul Convention broke new grounds by requesting States to criminalize various forms of vaw, including physical, sexual and psychological violence, as well as stalking, sexual harassment, FGM, forced marriage, forced abortion and forced sterilization. It was emphasized that the Convention is open to non-European states as well.

The panel was a welcome contribution to the rights of indigenous women and girls, including those with disabilities. My conclusion is  that access to justice, training of law enforcement officers, and education and participation of indigenous women in policy making is of the greatest importance. In order not to forget that, every country with indigenous people(s) within its borders should, together with those peoples and especially the women, make and implement a NATIONAL PLAN of ACTION.

The panelists showed the capacities of indigenous women!